Payton originated the role of Harriette Winslow on the forerunner series, Perfect Strangers.  From 2001-2005 she provided the voice for Suga Mama Proud on Disney Channel's animated series, The Proud Family and reprised the role in the 2005 TV movie, The Proud Family Movie and also on Disney+'s revival The Proud Family: Louder and Prouder.  The role earned her a 2005 NAACP Image Award nomination.  Payton also had a recurring role as the personal assistant to Gregory Hines' character, Ben Doucette, during Season 2 of Will & Grace (1999-2000).

She is a graduate of Albany State University.

Recognized as the most influential figure in the U.S. Civil Rights movement, the Reverend Dr. Martin Luther King, Jr. is honored annually for his work as an advocate and leader for economic development and equal rights for minorities.

This year’s theme is “the DREAM in ACTION," which celebrates the 60th anniversary of Dr. King's "I Have A Dream" speech and advocates for taking nonviolent action toward achieving equality, justice, and change for all.   The parade Grand Marshal is actress and singer, Jo Marie Payton, best known for her role as Harriette Baines Winslow on the ABC/CBS sitcom, Family Matters (1989-1998).

Beginning at 11 a.m., the 2.5-hour parade takes place along NW 54th Street on a route from NW 10th Avenue to NW 32nd Avenue that follows the sacred ground Dr. King once travelled during his frequent visits to Miami. The festivities continue until 6 p.m.,at a Family Festival in Dr. Martin Luther King, Jr. Memorial Park with live music, dance and theatrical performances, a crafts marketplace, food vendors, and children's activities.

This year is slated to be bigger than ever.  Miami’s best and brightest young performers will be bringing their talents to the street during the parade, illustrating that although times change, traditions will always bring our community together.

Formed in 1985, we are a 501(c)(3) non-profit corporation headquartered in Miami, FLand committed to celebrating and expanding the grand vision of freedom, justice, and equality for all people by annually commemorating Dr. King’s uplifting message of virtuous, non-violent change, and providing a dynamic, accessible forum for empowering education that inspires personal and societal transformation.

The organization is devoted to living and sharing the tenets of love that Dr. King unwaveringly taught, and in so doing, envisioned eradicating the scourge of poverty, racism, and brutality so that a new generation might wholly thrive in the light of prosperity, impartiality, and peace. 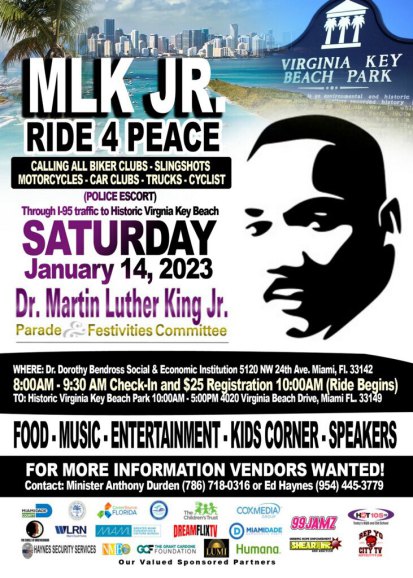 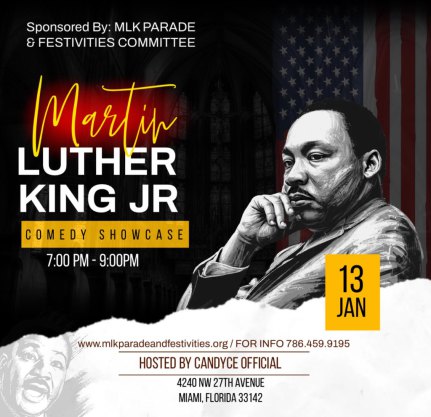 Check back from time to time to see what's new!