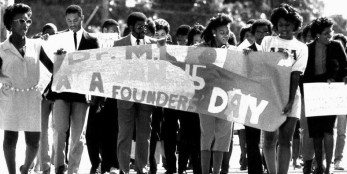 A native son whose lineage extended to the city’s founding, Marshall was one of the South’s last remaining historic activists who marched alongside Dr. Martin Luther King, Jr. and experienced, first-hand, the hardships of The Civil Rights Movement.  Marshall served with President Reagan to establish Dr. King’s birthday as a national holiday and President Clinton and four former Florida governors all issued commendations for his service as the official MLK FL Committee Representative.  As Founder of the Dr. Martin Luther King Jr. Parade & Festivities Committee in 1985, he received widespread recognition for successfully sponsoring Miami-Dade County’s annual holiday celebration.

An ordained clergyman, Marshall was a Non-Violence Coordinator who served as Chaplain for the Miami-Dade County Democratic Party and various police departments, prisons and hospitals.

A Mott Fellow for Community Education, Marshall earned a Ph.D. in Education from Arizona State University. During his 40-year tenure in the Miami-Dade Public Schools, he developed vocational education programming and drove labor union initiatives for fair employment.  He served as an Ambassador for Democracy in Africa, and was invited by China, Nigeria and Ghana on educational fact-finding missions.  An African-American and African-Caribbean Scholar, he completed post-doctoral studies in Anthropology at the College of the West Indies; Black History at Columbia University; and Instrumental Music Education at VanderCook College of Music. He served as a Professor of Social Science & Black History at Miami Dade College and was a founding Professor of Afrocentric Music Education at FMU where he also led Upward Bound and Special Services.  The Director of Teacher Corps at FIU, Marshall was also Dean of Fort Lauderdale College, and a University of Miami Professor of African Studies.

Throughout his tenure, to promote systematic social change through the creation andpromotion of arts and culture, Marshall originated a dynamic organization that encourages young artists to creatively popularize their visions of freedom and social transformation.

Following Dr. Marshall’s death, the Board of Directors embarked on brilliant new initiatives to honor his service to the community and commitment to fostering progress through education.  The organization expanded its influence to establish programming that provides personal transformation training to youth and families, ultimately equipping them for social, educational, and professional success.  A critical component of this instruction affords participants hands-on experience and cultural empowerment through community service.

In addition, the organization is currently encouraging the power of art to create poignant messaging that fuels social change.  The initiative began in 2021 as a Community Art Contest & Exhibit and is consistently expanding to creative multi-medium expressions that reflect the inspiring legacy of civil rights and its icons, and the contemporary meaning of Dr. King's timeless "I Have A Dream" speech.

“The function of education is to teach one to think intensively and to think critically.

Intelligence plus character--that is the goal of true education."